This time I decided to delay my article for a week to have a shorter gap until the next issue (the second part will be published tomorrow). The main reason being that they are kind of complementing each other. We had the same model as previous week, Julian . However, this life drawing session revealed a weakness in my drawing and in the second session we tried to improve that aspect working with my tutor.

Last week (14/05/2018) Julian, started as usual with a  short pose where his back muscles were stretched. He was just lying on the table looking the opposite direction from where I was sitting. This was a great angle if you wanted to observe the structure of the back. I didn’t spend too much time detailing as it was a quick pose anyway. Very roughly sketched the outline and a few basic lines and then I blocked in some tone to make it look slightly more complete.

We then spent ages trying to set the second short pose. In fact we spent so much time trying to sort that out that eventually we decided that this could be the long pose. So we ended up with quite an interesting pose where the model was sat upright on the table with his legs bent. One of his arms was just hanging supporting its own self weight on the table. The other one though (which made the drawing more difficult for me in the next session) was resting on the man’s knee.

Everything was going relatively ok with no major frustration or any problems. However, when the drawing was finished, a quick evaluation from the tutor revealed major issues which I didn’t spot when drawing (I didn’t even realise I made mistakes…). The way the head was positioned on the shoulders and neck and the alignment and angle of the model’s torso was wrong. It might not be visible in the first instance however not being accurate causes this feeling of unnatural pose. 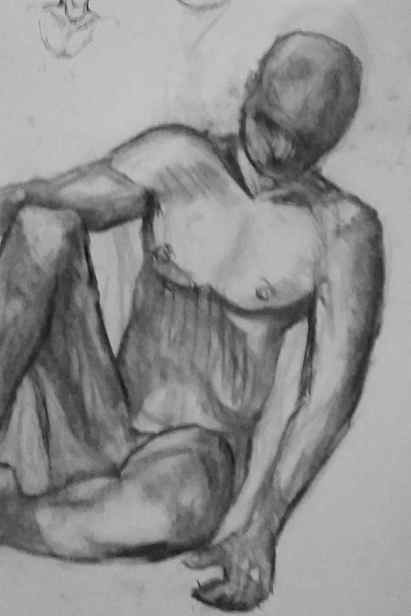 the alignment and angle of the model’s torso was wrong…not being accurate causes this feeling of unnatural pose.

Not having enough time to start from scratch, I decided I would try to sketch the head only, this time in the correct angle. All the drawings included in this article show the correct head position. The head was tilted downwards with the chin resting almost between the shoulders. What I like about this sketch is the kind of free-ish charcoal marks. 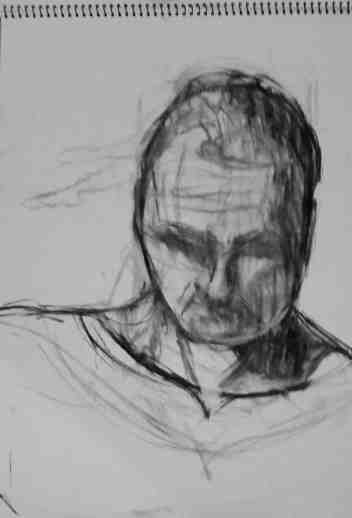 We decided that in the next session instead of following the rest of the class I would spend more time “studying” the rib cage and the upper body structure (which was genuinely very interesting!)

“Since I joined the life drawing classes, I have really developed a completely different way of looking at the objects around me. I try to spot the details and I try to understand how different elements of an object affect the proportions, the shape and the tone. Studying the human body is quite challenging but really rewarding!”

Art is more fun when you meet the artists themselves! Visit THE ARTIST…

This site uses Akismet to reduce spam. Learn how your comment data is processed.